This might just be paranoia, but should I be concerned about this? It seems pretty obtuse for a direct threat on my life, but clarity has never been Marmaduke's strong suit.
Posted by Joe Mathlete at 3:20 AM

Marmaduke is an asshole.

(side note: If $10.00 CAR WASH has a franchise in your area, I highly recommend them. They're the only car wash I know that will clean the inside of your windshield, and they only charge ten dollars!)
Posted by Joe Mathlete at 5:07 PM 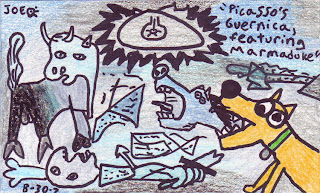 Marmaduke's new sexual deviancy is so uniquely specialized that I'm afraid googling to find the exact term might crash my browser. If you're up for it: "sex + fat + bestiality + elderly + rimjob + saltwater + nasal."
Posted by Joe Mathlete at 3:43 PM

Marmaduke's owner-man needs a suit jacket, fedora, and briefcase to go to the grocery store.
Posted by Joe Mathlete at 2:59 AM