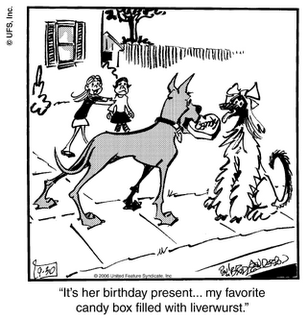 Marmaduke is ignoring millions of years of canine biological precedent and romancing a lady dog rather than just mounting her whenever he feels like it.
Posted by Joe Mathlete at 7:28 PM

I have received a number of emails about the missing images from the first month or so of this blog. When I first began this public service, I linked the cartoons from United Media's website (which is very similar to this blog, only it just posts the comic strips without giving them proper context). Then I figured out that after a month they switch out all of the Marmaduke comics with pictures of a little red X, most likely to piss off bloggers and the like.

Now the pictures I post here are hosted somewhere else, so that won't be a problem anymore. Regarding the little red X pictures, I do have a number of the old comics saved to my hard drive (when I realized what was happening, I went and grabbed what I still could before they were all gone), but have yet to go back and post them. This is primarily due to laziness. I estimate that I will fix this problem "someday," but until then I will keep up with the day-to-day(ish) updates as much as my attention span and capacity for humor-free comic strips permits.

Also, I have been made aware that other people on the internet write things about Marmaduke. You should google "marmaduke can vote" and "project marmaduke," because apparently it would be too much of an effort for me to provide direct links right now (see previous paragraph's reference to laziness). 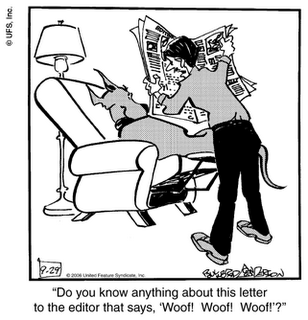 Marmaduke is interrogated by Owner-Man about an inflammatory dog-authored diatribe that was published in that day's newspaper, as if he is the only dog in town who would write a letter to the editor. Marmaduke resents the implication, so he ignores the question and keeps napping in Owner-Man's chair.
Posted by Joe Mathlete at 10:57 AM 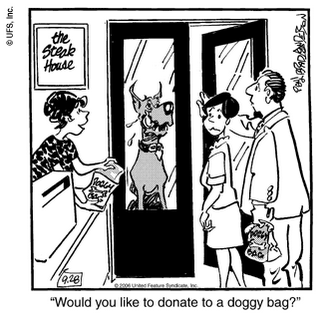 Marmaduke's owner-man lost his job, and with it went his family's dignity and sense of shame. Marmaduke and Owner-Lady are reduced to begging for food while Owner-Man stays at home and drinks.
Posted by Joe Mathlete at 10:54 AM 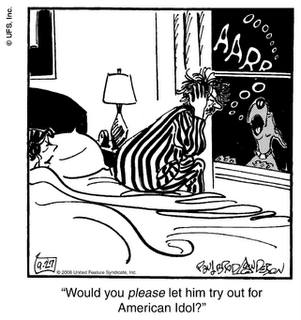 Marmaduke creator Brad Anderson is proving he is still relevant in the 21st century by tempering his usual blend of phantom humor and obtuse logic with a reference to a hit television program of which he possesses a vague awareness.
Posted by Joe Mathlete at 8:17 AM 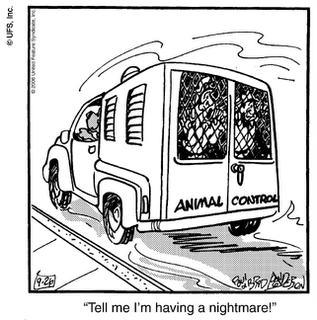 Marmaduke, in a highly ironic turn of events, has incarcerated two dog catchers in their own paddywagon and is driving them to parts unknown. One of the dog catchers is having a difficult time accepting the scenario.
Posted by Joe Mathlete at 1:30 PM 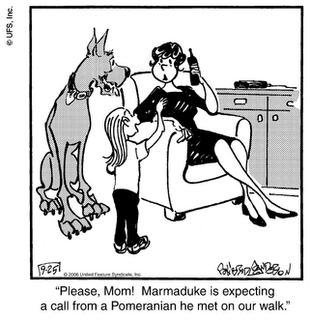 Marmaduke is being cock-blocked.
Posted by Joe Mathlete at 9:07 PM 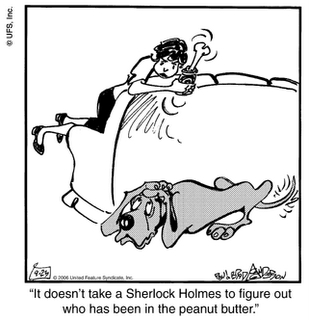 Marmaduke has been in the peanut butter. As he left an giant bone in the jar, Owner-Lady was able to finger him as the culprit without the aid of a Sherlock Holmes.
Posted by Joe Mathlete at 9:02 PM 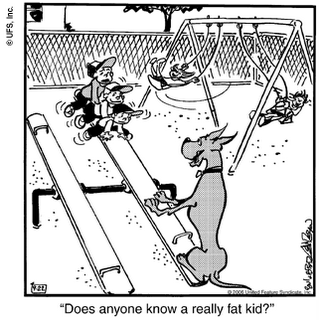 Marmaduke is playing see-saw with some area children. As he is humongous, he is kicking the living shit out of them; unless they find a really fat kid for their team, Marmaduke is going to get another shutout.
Posted by Joe Mathlete at 8:57 PM