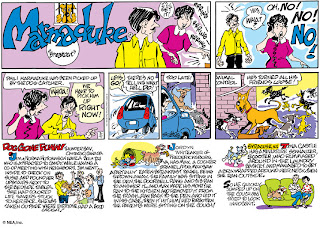 JOE MATHLETE IS SPENDING THIS WEEK AT THE POST OFFICE 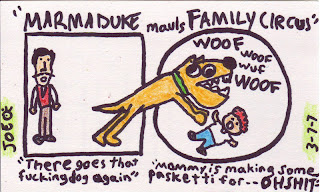 I've got a crap-ton of t-shirts to mail out this week; my goal is to get completely caught up with all pending shirt orders by the weekend, so the huge selfish dog will have to go (mostly) unexplained this week. Thanks for your patience, those of you who've ordered and have yet to receive; YOU are the Real American Heroes. Especially if you're also a marine.

Regular updates will resume sometime next week. Until then, a few tidbits to tide you over:

1. Marmaduke Explained has been syndicated weekly on CollegeHumor.com for the past couple months or so. A friendly guy who says his name is Streeter (I have no way of verifying this) emailed me and asked about running one installment of my blog every week on their site. I guess I'll have to do one more Marmaduke thing this week so they'll have something to run other than this post.

2. I've been coloring on index cards like mad as of late. Marmaduke-themed examples here and here.

3. Those of you who live in Houston may be interested to know that this weekend marks the world premier of a new show by the Brazosport Li'l Players, a theater company consisting of several cardboard boxes full of wigs, a smoke machine, and some people who act. THE ORDER OF THE SCARLET CAT is set in a small town in east Texas and follows a wealthy man whose dog is murdered by a cult as he attempts to reprogram his daughter's gay husband through intimidation and/or black magic. If you're looking for some progressive performing arts this weekend chock-full of murder, magic and gay reprogramming, look no further. I neither wrote nor directed this show, and may or may not have anything to do with it at all, but if it's half as good as ASSHOLE PARADE (a Satanic marching band comes through town, and people have emotions) 32 SHORT STORIES ABOUT BRAZOSPORT (Bill O'Reilly is replaced by a 70-year old drag queen named Wendy Chicago, played by a 70-year-old drag queen named Wendy Chicago), or WALT GOES TO MODELING SCHOOL (Walt goes to modeling school), you'd be kind of a moron for not checking it out this weekend and the next. If you live in Houston and all.

4. It's been awhile since I've given an update on my Imaginary Dental School progress. My midterms went reasonably well, though I misunderstood the premise of my Fundamentals of Molars oral exam; I thought they just wanted me to talk about teeth and stuff, but I was supposed to poke around in this guy's mouth (oral can apparently mean several different things. I'm not even going to TELL you what this one guy thought he was supposed to do).

5. If anyone has an extra ticket to Coachella (and I guess maybe a plane ticket to California), they should give it to me, 'cuz I really really really really want to see Bjork and Jesus and Mary Chain and Cornelius and Of Montreal and Konono No. 1 and LCD Soundsystem and like thirty of the other bands. If you like, I can write articles about it for your newspaper or webzine or blog or alt weekly or nerdy messageboard (possible headlines: "Joe Mathlete Asks 100 People At Coachella 'Who Are You Trying To Impress?'", "Joe Mathlete Pays Ten Dollars For Eight Ounces of Water While Sparklehorse Plays Half A Mile Away," "Joe Mathlete Gets Pink Hipster Vomit On His Shoes in the Middle of the Desert," "Joe Mathlete Goes to a Rock Festival in California Dressed Like a Hell's Angel and Nobody Finds It Amusing").

6. I need a haircut really badly. You don't need to do anything about this one; I'm just bragging.